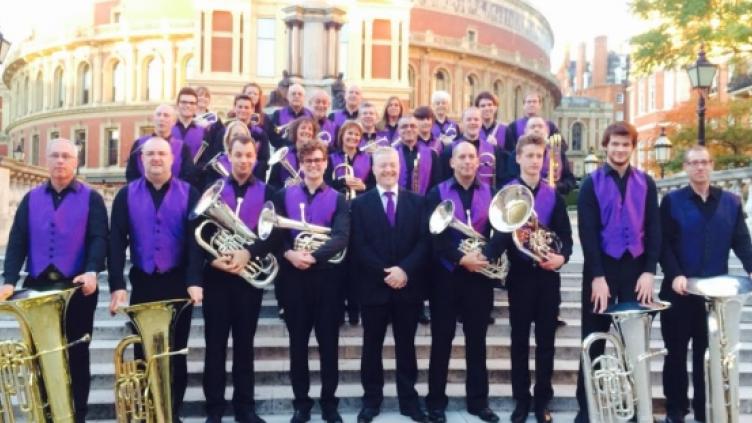 Big Success for Wantage Silver Band at the Royal Albert Hall In March, the Wantage 'A' Band won the  top section of the Southern Region Area contest , making them the London & Southern Counties Champions - and qualifying them for the National Finals, held on Saturday 11th October, in the Royal Albert Hall - a great testimony to the skill and dedication of conductor Phil Bailey. In the Finals, competing against the top 20 bands in the UK, Wantage won great acclaim, coming 10th, just behind the legendary Grimethorpe Band (stars of the film 'Brassed Off'), and ahead of famous bands such as Desford, GUS etc. Many supporters travelled up to see the action - some in the Band players’ coach on the Friday (they stayed 2 nights in a Hotel), and 61 in a coach for the day trip on the Saturday of the Contest. It was a proud day for the founder (in 1972) of the Wantage Band, Doug Brand, to see how his original group of child beginners had grown into one of the UK's leading brass bands; Doug was at the Finals to support. One of his original five protégés, Helen Wright, is still a member of the Wantage 'A' Band and her flugel playing was specially commended by the three judges. It has been a remarkable year for the Wantage organisation; its 'B' band reached the 2nd Sectional National Finals in Cheltenham, coming 8th out of 16; and the newly formed Academy Brass played at its first contest in the 4th section. In addition, there is non-contesting 'Concert Brass' band, a Training Band, a Youth Band, and beginners groups. The organisation has greatly benefitted from its first year in a brand new building on the outskirts of Wantage, which is in continual use for practices. Other Bands, who often struggle to obtain sufficient players, enquire about the secret of the success of Wantage; Bandmaster for 30 years, Eileen Sykes, claims “It is the policy of continually welcoming new beginners, providing tuition and an instrument for a modest subscription and, of course,  the invaluable teaching by Phil and all our conductors”. For further information please visit www.wantageband.org Picture by Colin Moss.