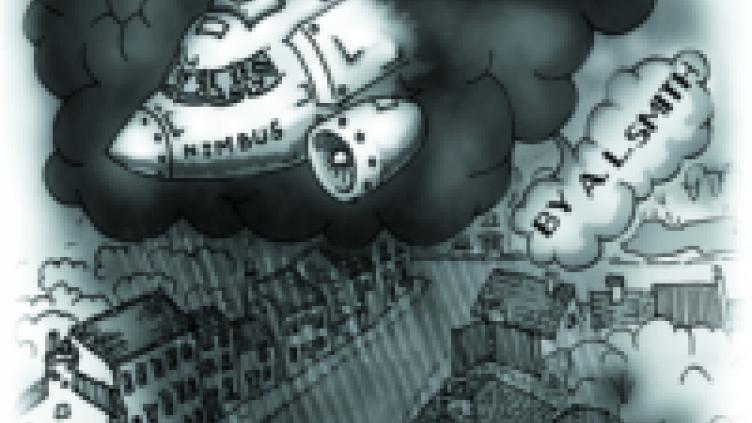 Not many brass bands can claim to have an author amongst its ranks, and it is extremely unlikely that any can claim to have two, but that doesn’t apply in the case of Wingates Band. Band President, David Kaye, wrote an historical account of the band, titled ‘From Bible Class to World Class’ to coincide with its 140th anniversary in 2013 whilst, band treasurer and general dogsbody, Tony Smith, wrote a humorous account of the weather making activities of a bunch of zany cloud machine owners. If you are wondering what this has to do with brass bands its probably best if you read his book called ‘Making Rain and Other Things Is Our Business’. Tony has spent a lifetime associated, in one way or another, with aviation and his book reflects this, but it also reflects on his other passion – brass bands. His book features a brass band and refers to a number of compositions, some by Wingates resident composer, Lucy Pankhurst, who he commissioned to write four pieces in collaboration with his publication and which are called ‘Mr Sonneman’s Unusual Solution’, ‘A Captain's Calamity’, ‘The Great Cloud Parade’ and ‘St.Kilda’s Fling. Tony’s book was the catalyst for a musical show which he calls ‘The Great Shindig’ which is also the name of the last story in it. The show features several supporting ensembles, as well as Wingates Band – Warrington Pipe-Band, The Catherine Brown Dancers, The Brixi Singers and aspiring young vocalist Caitlin Wineyard. The whole show will be highlighted by digital imagery produced professionally by Liverpool based Draw & Code Limited, working in collaboration with Media Studies students from Wigan & Leigh College. The link between Tony’s book and the music played, all of which are mentioned in it, will be narrated by a compere who will guide the audience on a journey following the escapades of the zany weather-makers. This innovative and imaginative idea had long been Tony’s dream and was given an impetus by Rachel Veitch-Straw of Brass Bands England. A meeting to discuss ways of raising funds for the band and finding volunteers for the backroom team provided an opportunity to discuss his idea. Rachel’s enthusiasm and encouragement resulted in a meeting with Arts Council member Ian Anstee who also offered encouragement and enthusiasm which led to an application for funding being made which has been successful. The project will begin in September, 2015 and will culminate in a live show on September 25th 2016 at The Brindley in Runcorn. With some justification, Tony, can claim to rain over Wingates, at least, in-between his other band chores. ‘Making Rain and Other Things Is Our Business’ can be acquired from lulu.com or Amazon or from Tony’s website www.makingrainandotherthingsisourbusiness.com Three further publications in the series are in the pipeline – ‘A Clouds Life’, ‘Weather to Order’ and ‘It’s not just about rain’. These should be available to coincide with the premier of ‘The Great Shindig’. Tony was inspired to ask for BBE support after attending a Funding Network Meeting: The next such events are Sept 29th hosted by Brackley and District Band and Oct 1st at Penrith Town Band's bandroom. All bands welcome.