Smiles in the Rain at the Miners’ Picnic 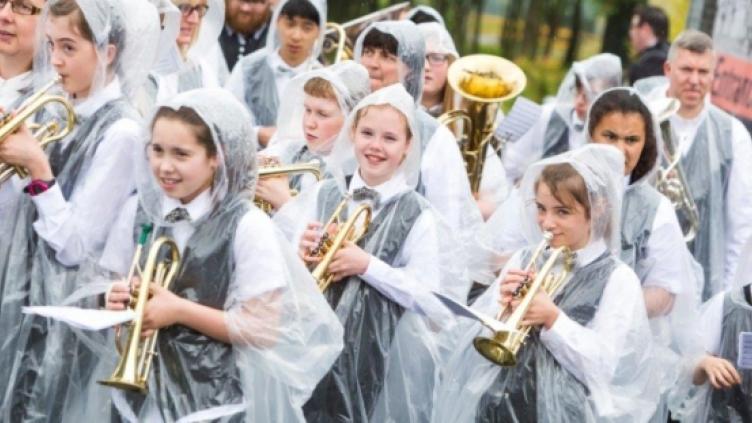 Brass Bands England were lucky enough to be invited for a “behind-the scenes” look at the unique and inspirational event that was this year’s Northumberland  Miners’ Picnic. Situated at Woodhorn Museum and Archives, the event is an annual celebration of the traditional Miners’ Picnic which began more than 150 years ago and involved political speakers and a grand procession.

2016’s event incorporated a very special musical premiere of a composition  by Lucy Pankhurst, written especially for Ashington Colliery Band, Bedlington Brass, Ellington Colliery Band, Jayess Newbiggin Brass Band and Music Partnership North – Northumberland. The almost hour-long performance featured processions by the bands, echoing the parades of bygone years, and celebrating the sounds of brass inspired by the international superstars, Mnozil Brass, with whom the bands connected for the first time in 2014. The whole project is called “Reflection Connection” and the music was in turn poignant, uplifting and powerful.

The project developed in 2014 after youngsters and band members expressed a wish to be able to go to Peterborough to see the renowned Mnozil Brass. bait, one of 21 Arts Council funded Creative People and Places programmes worked with the bands to organise not only a trip, but also a chance to to participate in a workshop with Mnozil. Mnozil returned the visit this year by making a special trip to the Miners’ Picnic  and performed on Woodhorn’s bandstand for an hour to the delight of the audience and the awe of the younger players. After Saturday's debut performance,  the bands and Music Partnership North – Northumberland took Reflection Connection indoors to the prestigious venue of Sage Gateshead,  again sharing the bill will Mnozil. Audience members were moved to tears for a second time in the finale of a weekend that will be remembered for decades to come. Reflection Connection: delivered in partnership with Ashington Colliery Band, Bedlington Brass Band, Ellington Colliery Band, Jayess Newbiggin Brass Band, Music Partnership North – Northumberland, composer Lucy Pankhurst, Woodhorn Museum and Sage Gateshead. It was co-commissioned by Woodhorn Charitable Trust through the bait programme.