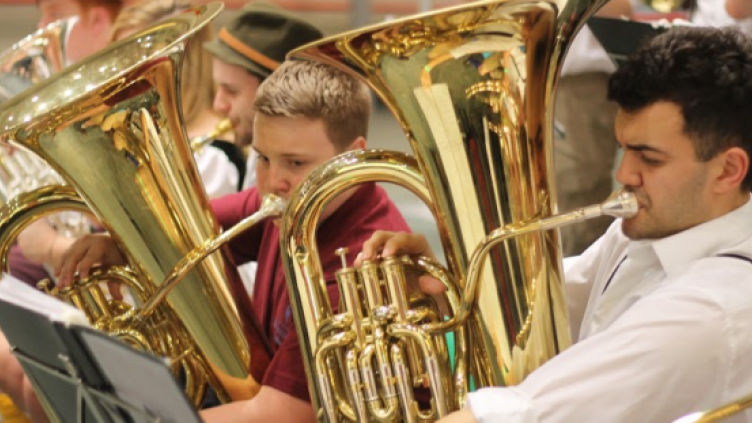 The Organising Committee for UniBrass 2016 are extremely pleased to announce that tickets for both the UniBrass 2016 contest and this year’s Gala Concert with the world famous Black Dyke Band are now on sale. UniBrass is the world’s only inter-University brass band contest and is the annual focus for University bands in Britain, supported by the UniBrass Foundation, a registered charity. British Bandsman described the 2015 Contest as “a projection of the future of banding”. UniBrass is an entertainment contest and UniBrass 2016 will take place on 20th February 2016 at University of Warwick’s state of the art Arts Centre. An educational programme will run alongside the contest, kindly supported by Besson Instruments.

The UniBrass contest, which was described by Brass Bands England as “the most innovative thing to happen to banding in 100 years”, now enters its sixth year and is open to all University bands in the United Kingdom. Space is available for eighteen bands and registration opens on 1st of November. Last year’s contest was full within hours of registration opening and the Organising Committee expects interest to be equally keen for this year’s contest, which has established itself as the focal point of University brass banding.

The most famous band in the world

Following the success of the Gala Concert with Jaguar Landrover Band at UniBrass 2015, this year’s Gala Concert will see the world-famous Black Dyke Band take to the stage to perform a full concert in the 2000 seater Butterworth Hall of the University of Warwick Arts Centre.

In order to produce the UniBrass Contest at a cost affordable for all student bands and the public, the Organising Committee has already started fundraising and each of the ten committee members has been challenged to raise £100 each before 1st October, for a total of £1000. An outing at Whit Friday and fundraising curry have got the fundraising ball rolling! The committee will be updating progress throughout the summer on the UniBrass Facebook page and on the @UniBrass Twitter. You can donate to UniBrass via the UniBrass website by clicking the “donate” button. The Organising Committee for UniBrass 2016 has many more exciting announcements to make over the coming weeks and months. For all the latest information sign up to their email newsletter mailing list, where you will also receive a free MP3 download of UniBrass 2015 winners Manchester’s set.