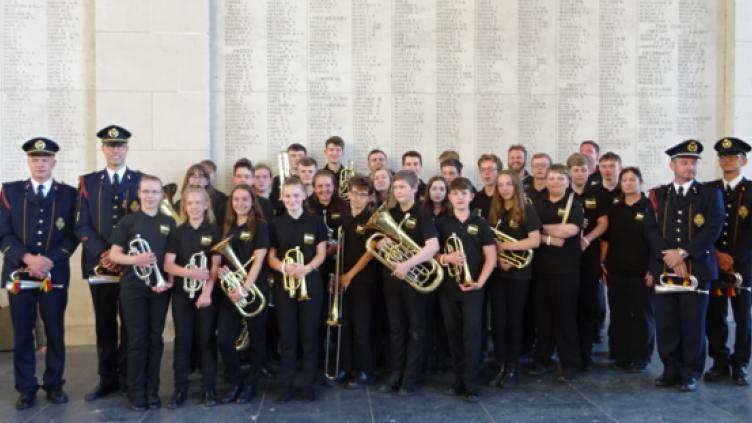 Stockport Schools’ Brass Band (SSBB) have just returned from a successful tour of Belgium. Based in Ostend, the band – made up of thirty players from the organisation’s senior and intermediate bands – gave concerts in Bruges and Ypres, including a memorable performance at the famous Menin Gate Last Post ceremony.

Sisters Ruby and Phoebe reflected on the experience of playing at the Last Post ceremony. “It was overwhelming to see all those names of the missing,” commented Pheobe, adding that it was “truly humbling to play at such a beautiful memorial.” She was very proud of Ruby who, as the youngest member of the band at age 11, laid a wreath on behalf of the Stockport Association of Normandy Veterans. Ruby said that “it was an experience that I will remember for the rest of my life.”

The tour included visits to the In Flanders Fields museum and Tyne Cot Military Cemetery, which gave all the players valuable context for their participation at the Menin Gate. “The whole trip was memorable in so many ways,” commented MD Iain McKnight, “but the Menin Gate ceremony will live long in the memory for all our players. It is a special honour to have participated in this centenary year.”

The Band also entertained assembled crowds in Bruges and Ypres. “I was especially proud of the band who coped admirably with the incredibly hot weather – 32C+ – in Bruges,” added Iain. “We had lots of lovely comments from all those listening to us including a couple on holiday from Evesham who described band as ‘phenomenal’. That kind of feedback certainly makes all the hard work worthwhile!”

Band tours never pass without incident, of course, but even leaving the music on the coach didn’t put back the band’s concert in Bruges. The quick response and strong arms of two of the band’s more senior players averted a late start to the performance, as both Sam (front row cornet) and Ben (bass trombone) put in a good shift by dashing across town in the sunshine to collect the folders. The tour also included lots of social activities, including time on Ostend beach playing cricket and tennis as well as the traditional ‘tour quiz’ which included a brass band music round as well as spot test of the facts the players learnt whilst on the Bruges Canal tour.

Tom (principal cornet) and Sam (soprano) who will be leaving SSBB to go to University summed up the trip commenting “The friendships and memories made will last forever, everyone got on so well and the atmosphere from socialising on the beach to playing in the concerts was just great. For us particularly, as SSBB has been such a big part of our lives, this trip was an unparalleled send off”.

Administrator of the Band, Alice Bell, was impressed with how well all band members conducted themselves throughout the tour and how they were a real credit to the organisation. So much so that plans are already being made for the next tour in 2020.