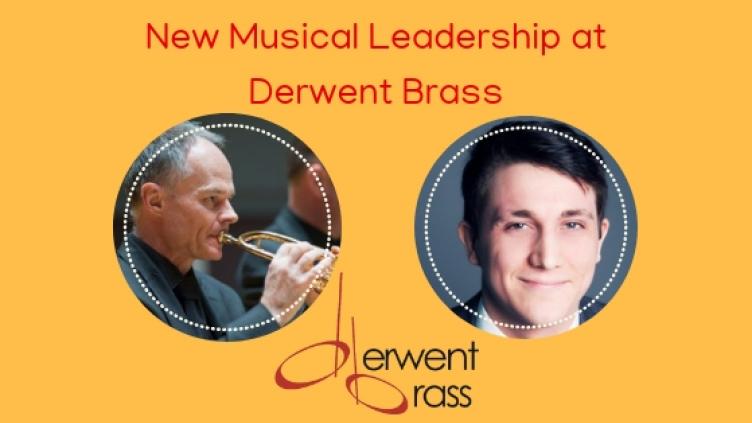 Following the news of Musical Director Keith Leonard’s retirement earlier in the year, the management team at Derwent Brass have been hard at work over the summer to appoint a replacement.

From a humbling collection of applications from across the UK and even abroad, the band stepped through a lengthy and detailed evaluation process and are now extremely proud to announce its new musical leadership team.  The young and talented Jack Capstaff takes over the role of Music Director, joining alongside the highly respected and experienced Mark David in the role of Artistic Director.

Having conducted an array of brass bands, most recently the Yorkshire Imperial Band, Jack brings with him an impressive background inclusive of a BMus in Composition and Conducting from the Royal Welsh College of Music and Drama and was this year’s runner-up at the NABBC Conductor’s competition.  He is in high demand as a freelance orchestral conductor, a recognised composer and also holds a residency with the symphonic brass group Harlequin Brass Ensemble.

“I’m incredibly excited to be the new Music Director of such an innovative and exciting group as Derwent
Brass. It isn’t very often that you find an ensemble whose aesthetics and musical values coincide so clearly
with your own and I look forward to seeing what excellent musical and extra-musical results this relationship
might create in the years to come.

I was impressed with the organisation of the band from minute one of stepping through the door and once in
front of the band, I was able to see what a special group of hard working and committed individuals they had
along with a work ethic that will facilitate an excellent musical output.

I’m also greatly looking forward to working with Mark David, for whom I have a tremendous respect as a
musician and educator, and the idea of what we might achieve together is extremely exciting. Keith leaves
very large shoes indeed to fill with Derwent, and I just hope that we can build on the considerable success
and musical enjoyment that he has brought the band over the last 25 years... I can’t wait to get started.”

Working alongside Jack, in the role of Artistic Director is the highly renowned and talented Mark David.  Mark is currently Artistic Director and Head of Brass at the Royal Academy of Music, Principal Trumpet at the Academy of St Martin in the Fields and a member of the
Nash Ensemble.  He has enjoyed a distinguished career as a performer in some of the most prestigious ensembles in the world and held the position of Principal Trumpet in the Philharmonia Orchestra for over twenty years.

Following the tragic early death of James Watson in 2011, Mark assumed his current role at The Royal Academy of Music and has positioned the brass department as one of the foremost in the world. It is testament to his teachings that so many former students now
occupy top positions worldwide.  Mark has brass bands in his roots, hailing from Cornwall he began his musical life in the St. Austell Band before going on to play with bands such as Virtuosi GUS under Keith Wilkinson and Bram Tovey, City of Coventry under Maj. Peter Parkes and Jones & Crossland under Stephen Roberts.  Mark has programmed and conducted a wide range of brass band music often working in collaboration with Elgar Howarth and more recently has enjoyed guidance and support from Howard Snell.  Mark David is also a Yamaha Performing Artist.

“I have been following the activities of Derwent Brass from afar since making my home in Derbyshire four years
ago and have been incredibly impressed with the breadth, ambition and originality of their artistic programme.
The band, under the inspiring leadership of Keith Leonard has epitomised all that is great about the British brass
band tradition and heritage, but at the same time has forged partnerships in new and exciting arenas. It was
evident at my first rehearsal that the band was committed, ambitious but also friendly, supportive and
determined to have fun!

I’m looking forward very much to working with Jack and the band in writing the next chapter in the already
compelling story of Derwent Brass.”

Jack and Mark join the band with immediate effect, marking a hugely important moment in the history of Derwent Brass.

“We are both fortunate and privileged to have ended up with somewhat of a dream team for Derwent Brass. Jack is clearly a well-
educated and talented conductor, young in his career and brimming with ambition with a profile that is perfectly aligned to that of

the band. And as for Mark what can I say? He is an astonishing musician and an inspirational educator, symbolising the very best of
British brass playing. It was always a key part of our selection criteria that we engage with a quality brass musician and I think we
managed that for sure!”

“When I announced my retirement, my main concern and desire was for the ongoing success of the band. The management of
Derwent Brass have worked tirelessly over recent months to ensure a smooth transition and I have every confidence that the future of
the band is in very safe hands indeed with both Jack and Mark at the helm. I shall continue to actively support and help the band as
much as I can, and I look forward to monitoring the band’s inevitable continued success. I sincerely wish them all the very best.”

Derwent Brass would like to thank everybody who expressed interest throughout the process and wish both Jack and Mark a long and enjoyable tenure with the band.