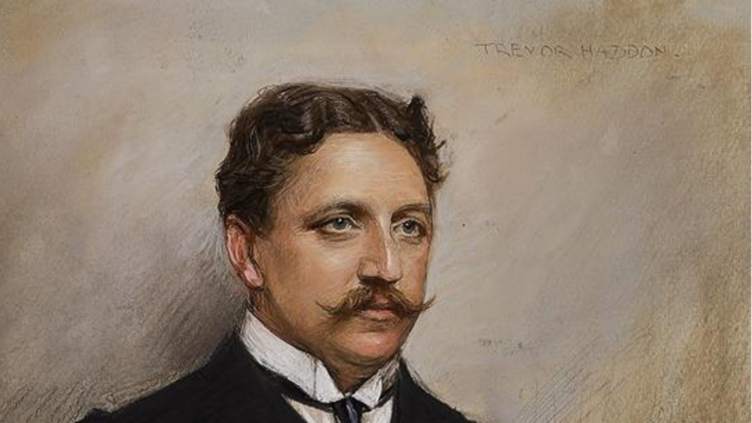 I was inspired to write a blog on this piece of music because of three synchronous events. The first was unassuming: a piano score found locally in a second-hand shop; I was drawn to the font used by the printers. 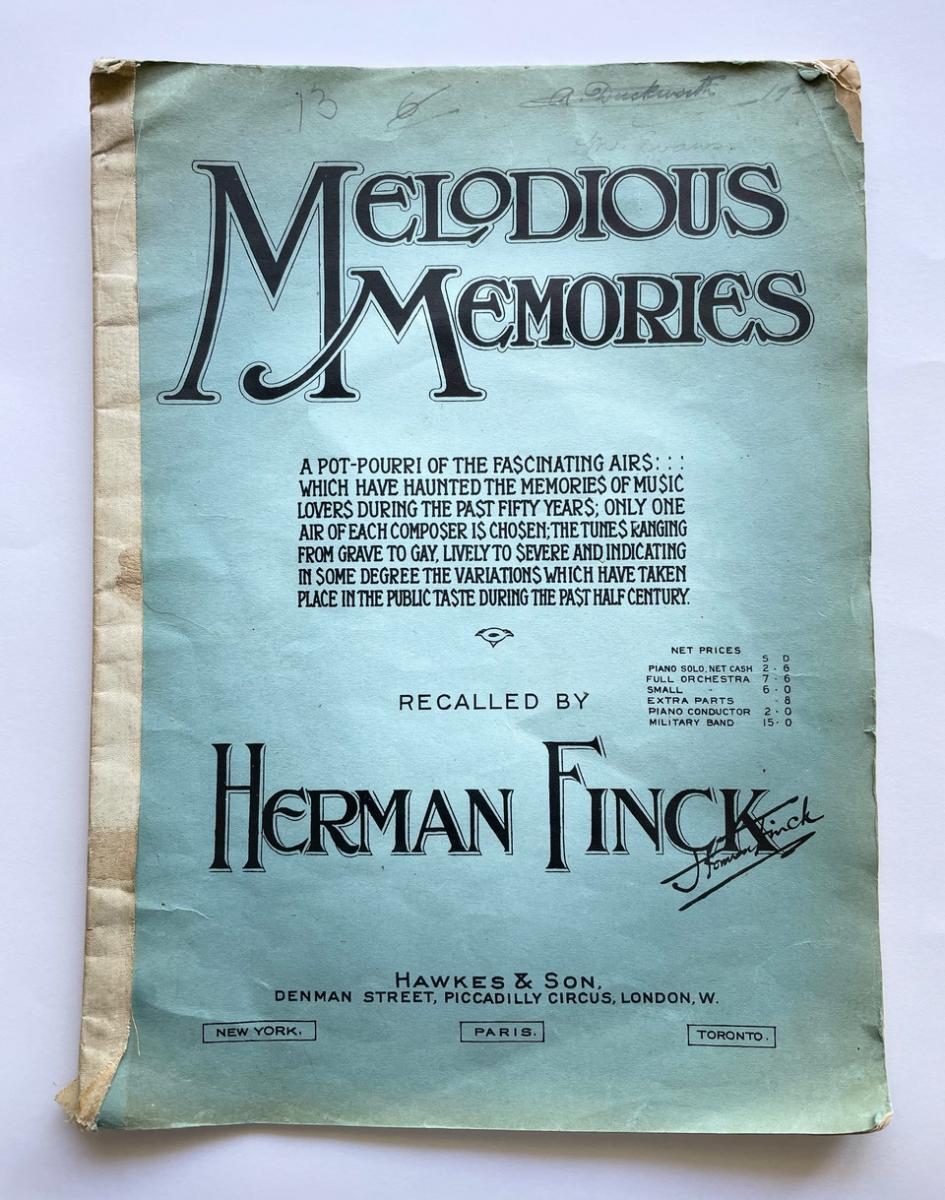 I was also intrigued by the way Finck – composer unknown to me – had brought together no less than 75 titles into a self-styled potpourri of greatest hits from 1863 to 1913.

Maybe a month later, I happened on an Austrian YouTube clip of Finck’s original 1907 phonograph recording, posted with a request for help in identifying some of the medley items. The same week the request for information relating to Finck’s military band arrangement of the same piece, in one of the weekly Brass Band Archive (BBA) volunteer research emails.

I created an enormous spreadsheet for BBA to use in cataloguing the brass band item and to compare the three arrangements. But at this point, I still knew nothing of Finck, and so this blog is drawn from my interest in the man behind the medley. 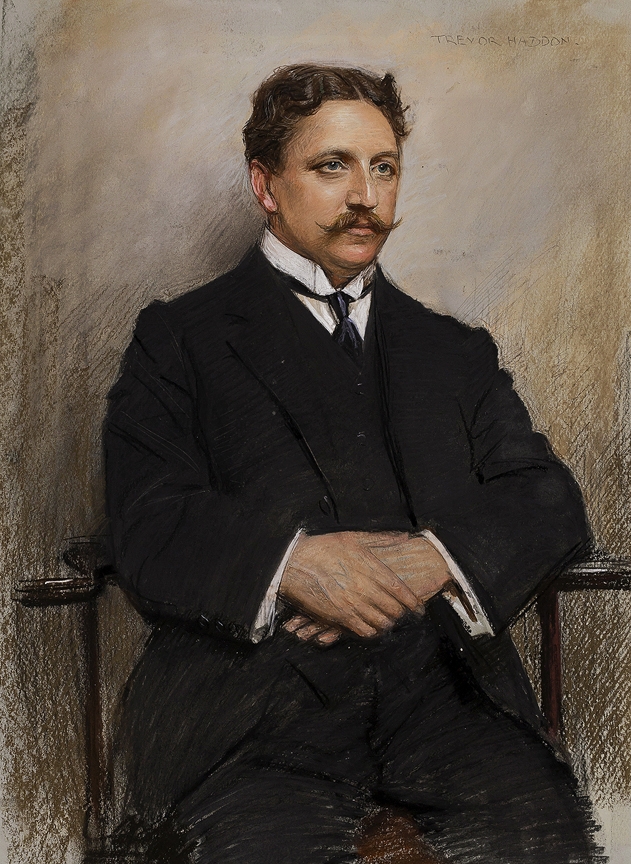 Born in London in 1872, to Dutch parents, Hermann van der Vinck anglicised his name to Herman Finck when he enrolled at the Guildhall School of Music and Drama before beginning a successful career as a British composer and music director of the Palace Theatre in London.

Finck was also principal conductor for several other theatres, including Drury Lane, Theatre Royal and Queen’s Theatre, and he was a truly inexhaustible composer. While his main compositions were understandably for the theatre scene – ballets, operettas, revues, and incidental music – he also composed mood music for the silent movie scene. 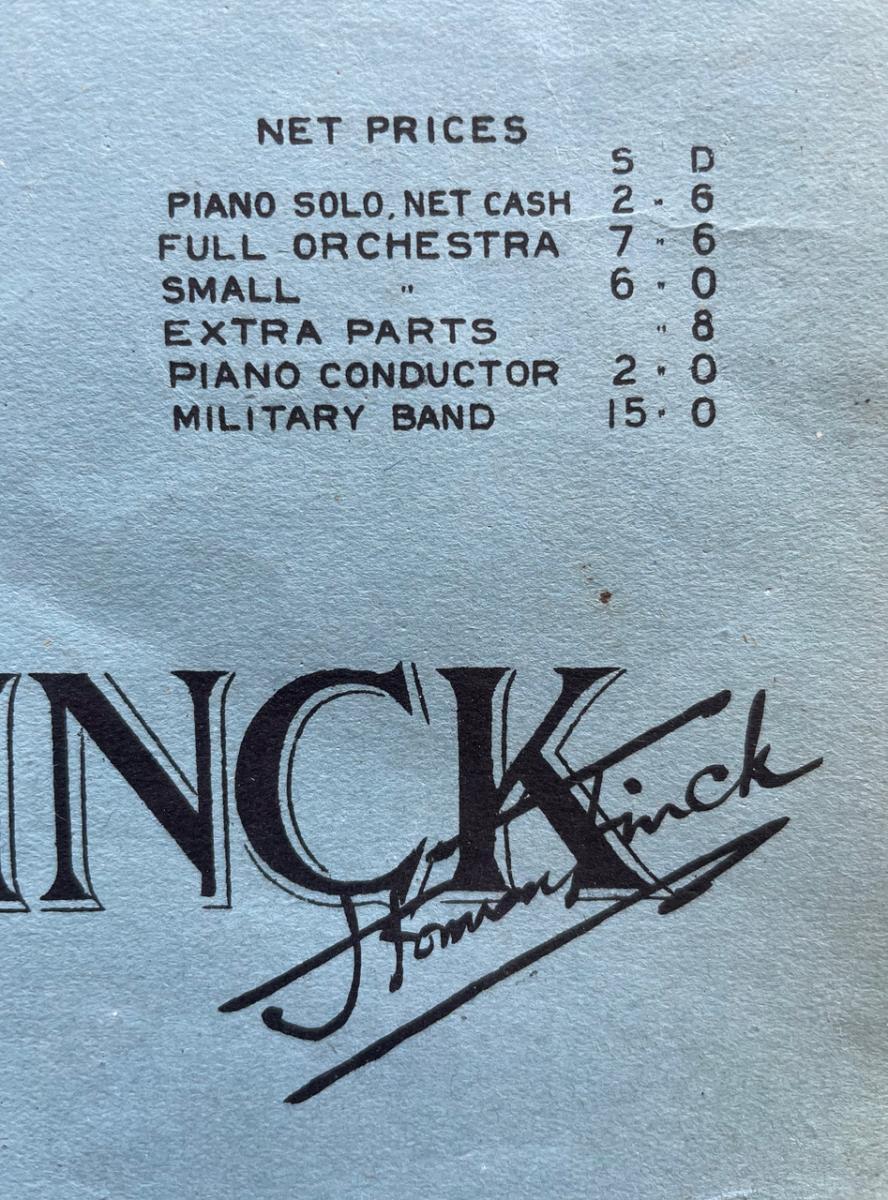 During WWI, Finck wrote and performed many hits of the day. One of the most poignant of these is Gilbert the Filbert which was performed in 1914 by popular singer and actor, Basil Hallam. Finck had written the song for a revue called The Passing Show, in which Hallam played the part of the young ‘knut’ – described in the lyrics as a nut with a K, the pride of Piccadilly. Hallam recorded the song the same year.

Finck’s other major claim to fame is that he conducted the first London stage production of Show Boat in 1928 – this was also the Afro-American singer, Paul Robeson’s first appearance in the cast. In 1934, Finck composed the music for the film adaptation of Charles Dickens’ The Old Curiosity Shop, which gained the dubious description as Thomas Bentley’s “expressionist nightmare”!

Melodious memories were obviously important to Finck – both in terms of his medley output (there are at least three plus their accompanying arrangements), and when he chose the title of his autobiography, My Melodious Memories, published in 1937, two years before his death, aged 67. Not only was his general compositional output prolific, but also his link between music and memory, and the way he put an incredible number of classical and popular hits together in his potpourri arrangements.

This may well have been because he was conducting a dance band in a music hall. Perhaps it was his style to put together a ‘set list’ arrangement.

My reservation with this theory is that the pieces don’t necessarily flow in a format that works for dancing. In Melodious Memories, the tunes flit from tempo to tempo and from waltz to march to mazurka in a matter of bars, but from the point of view of providing a band or orchestra (or solo pianist) with a score between 9 and 39 minutes long, it does make sense.

A Courtly Conductor at the Palace Theatre

The Palace Theatre originally opened in 1891. When Herman Finck took on the role of Music Director between 1900 and 1920, he inherited an entertainment programme which included the first 70mm films and newsreels, as well as variety shows and musical hall productions.

In 1911, the name shortened to Palace Theatre, which had become famous for both its orchestra and for the Palace Girls who performed song-and-dance routines, to the music composed and conducted by Finck.

In 1912, Finck was responsible for the music for the first Royal Variety Performance, for King George V. During Finck’s tenure at the Palace Theatre, he made several recordings. Phonograph technology was new, and it appears that Finck embraced it with the enthusiasm he gave his compositions. More firsts for his list of accomplishments as well.

He is credited with having recorded the first full-length phonograph of Tchaikovsky’s Nutcracker Suite (7 sides) in 1909, but before that, Finck conducted the Orchestra of the Palace Theatre, London in a 1907 recording of Melodious Memories. 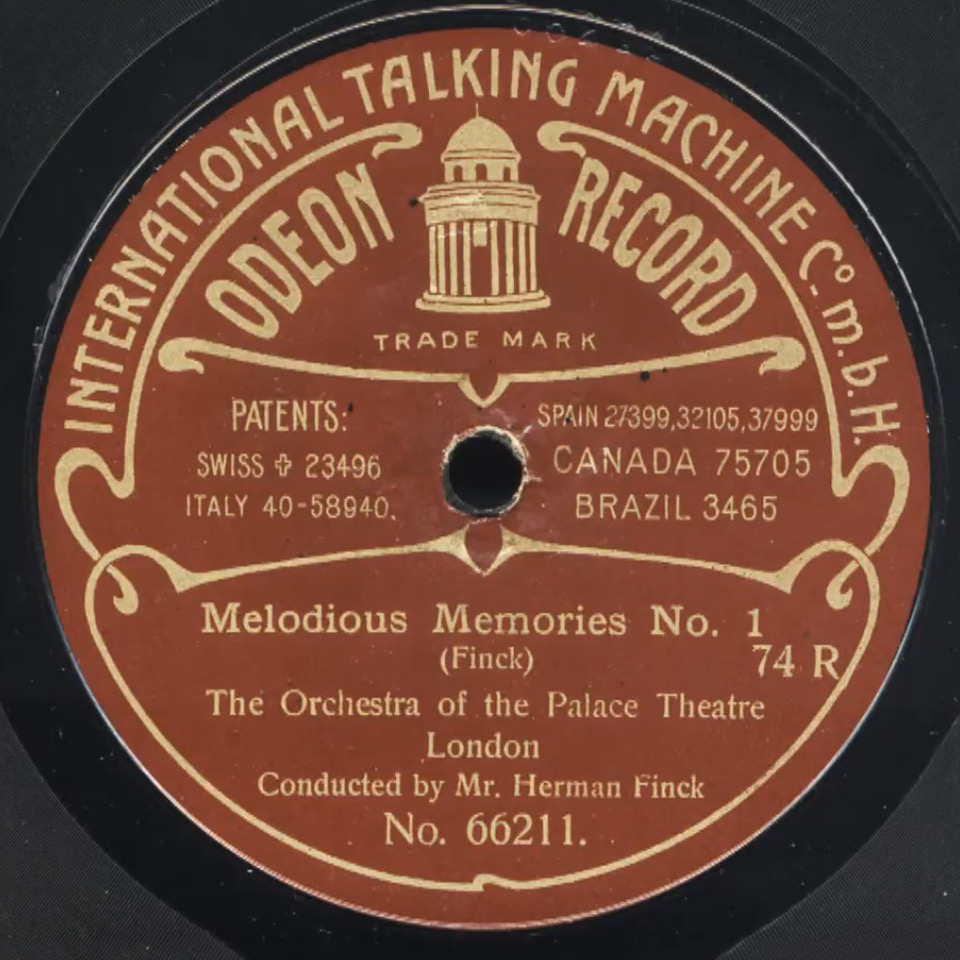 This was released by the International Talking Machine (patents pending at the time) under the Odeon Record trademark. It includes almost two extra sides of music, not included in the band score.

“In recognition of many delightful hours this Anthology of Melodies is dedicated most gratefully to a Master Anthologist in Literature.”

The musical definition of a potpourri is similar to that of a fantasia. It is a medley of light, popular music where individual tunes are juxtaposed with no connection or relationship. It was coined by a French publisher and has been used to describe pieces like Melodious Memories since 1711.

The military band score, held by BBA, includes the Bb cornet part marked for both soloist and conductor. This is also the only part which shows titles of each melody, as they segue into each other, corresponding to the piano score where the titles are clearly marked. The rest of the band, as can be seen on the Eb cornet part below, rely on tempo markings. 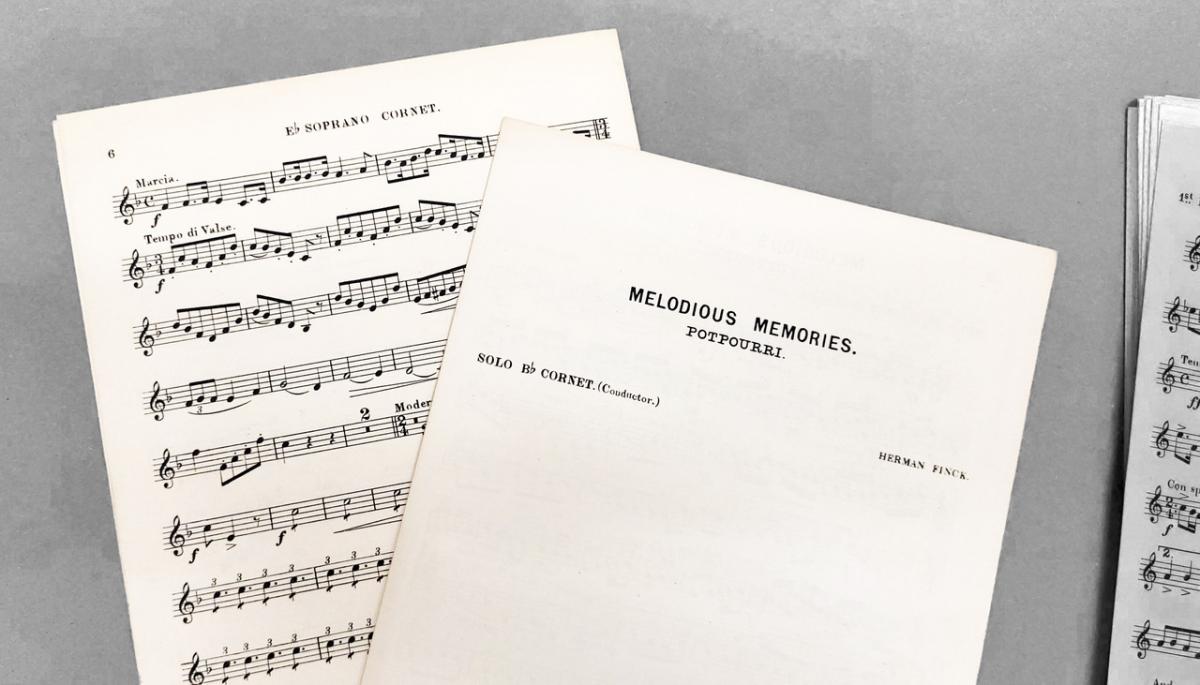 Finck loves his low brass – in addition to the baritones, euphonium, and three trombones (including bass), there are two bass Bb parts, and one for Eb bombardon, all of which are the military band names for various types of tubas.

There is an additional solo part for a saxhorn. This is not a strange name for a saxophone, but was invented by the same man, Adolphe Sax. The original saxhorn was a three-valve instrument, with a narrower bore taper than a tuba, inspired by the valved bugle, and on which the modern-day flugelhorn is based. The part in Melodious Memories is for an Eb or alto/tenor saxhorn.

Of the 75 tunes contained in the piano and orchestral score, Finck limits himself to a mere fifty-five melodies in the brass arrangement. There doesn’t seem to be a recognisable pattern of how he chose which pieces were left out – there are perhaps a few less waltzes, most notably Blue Danube.

All the versions begin with an introduction written by Finck, leading into Soldiers in the Park, a hit tune from Runaway Girl by Lionel Monckton. In the brass arrangement, 20 melodies come from similar musicals or operas, including Carmen, Lohengrin, La Boheme and Mikado. The rest of the melodies are hit tunes – the top of the pops of the turn of the century. Some of these reflect the music that entertained troops in the Boer and Russian-Turkish wars.

Songs like Private Tommy Atkins, The Old Brigade, McDermott’s War Song and Johnny Get Your Gun alternate with love songs like Daisy Belle (Bicycle Built for Two), Two Lovely Black Eyes, Salut d’Amour and Who’s That a-Calling, while throughout there are transitions provided by Tchaikovsky, Grieg, Elgar and Mendelssohn, including snippets of both wedding marches and the 1812 Overture.

The list is immense, and sadly, there doesn’t seem to be a military band recording, but the potpourri maintained its popularity long after Finck had left the Palace Theatre.

In 1928, Jack Hylton and his [new] Orchestra recorded the military band arrangement of Melodious Memories after he had been dismissed by his former band in 1922. Since Hylton augmented the orchestra with highly skilled brass players from his other JH Organisation bands, this is possibly the closest we can get to the sound of the pure brass arrangement, all tucked into 8¾ minutes.

Like the piano and orchestral scores, the piece closes with Herman Finck’s 1910 “hit single”, In the Shadows, originally written for the Palace Girls.