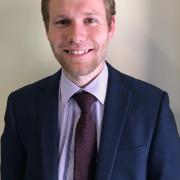 Max began playing trombone in brass bands whilst at Smithills School. He enjoyed a successful time, winning national and international titles, performing in the Royal Albert Hall and touring the USA. Since then, Max has played in bands in the North West and Midlands including Freckleton Brass Band, Derwent Brass and Pemberton Old Wigan Band.

Max studied music at Lancaster University, specialising in conducting, where he directed the Brass Band and Wind Band for two years. Max conducted Friezland Brass Band in Saddleworth for three years, taking on a band with ten players and leaving with twenty three. Max is currently the Musical Director of Blackpool Brass.

Max is a composer and arranger for brass bands, and a variety of other ensembles. His music has been published across Europe and performed across the world. His brass quintet composition, The Kraken, was performed at the 15th Anniversary of the Composer's Voice Concert Series in New York and his piece for brass band, Into the Future won the competition to choose the anthem for BrassFest UK 2018.

In 2011, in the final year of his degree, Max founded the University Brass Band Championships: UniBrass. He continued his involvement after graduation by compèring the contest for seven years. In 2015, Max joined the UniBrass Foundation as a Trustee.  He has also served as a trustee of Brass Bands England since 2015. Max works as a music teacher and has been Head of Music at an Academy in Manchester since 2015.