The story of the Little Red Car and his pBuzz pals! 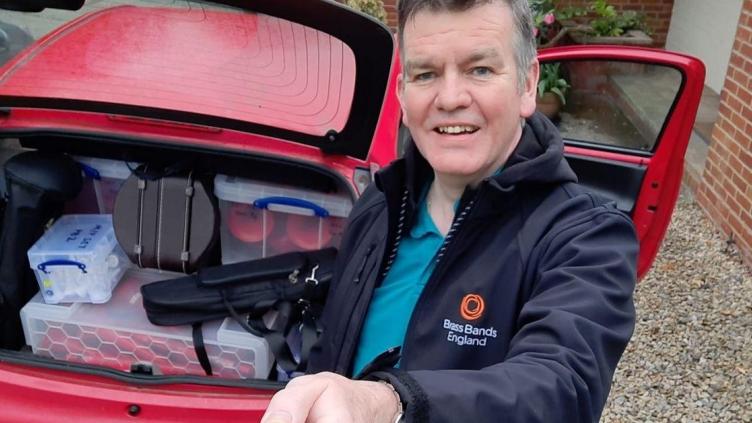 It started early one morning on Thursday 6 May. The little red tardis was loaded up with boxes of pBuzzes (courtesy of Gloucestershire Music), a trombone, a trumpet, and a box of random “brass” instruments (including a six feet long garden hose fitted with funnel and mouthpiece. I then set off for the Forest of Dean for the first of many sessions in my BBE music workshop adventures. 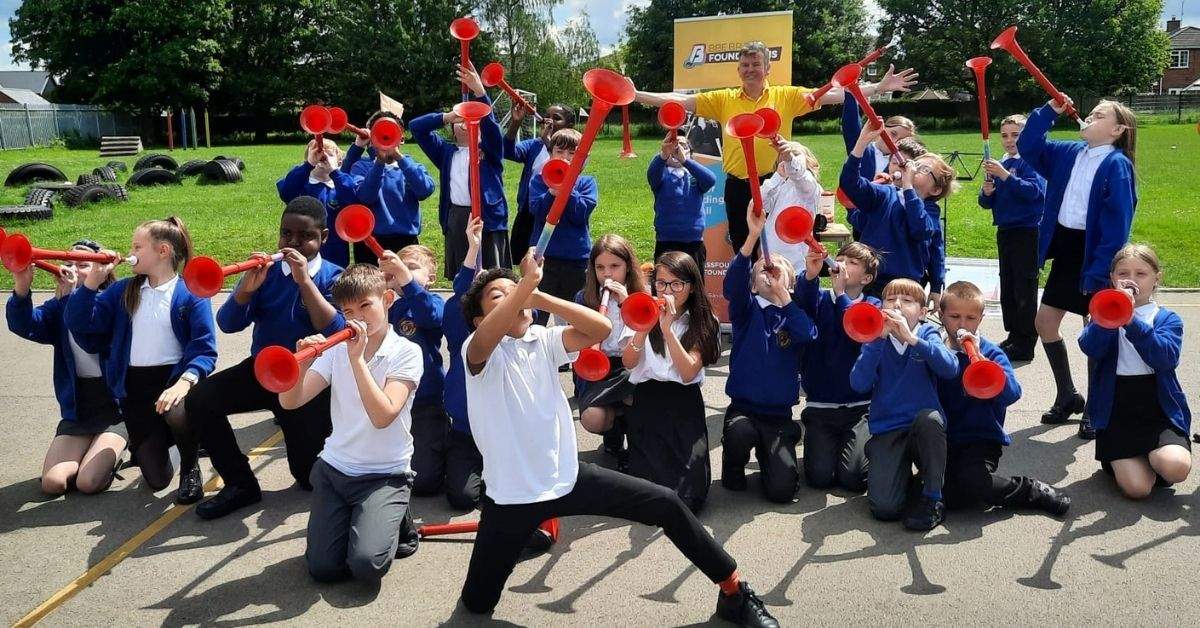 Ruardean was the venue for this first event and I rolled up to the school gates just as the last of the children were being herded back inside for the day. Enthusiastic staff and even more enthusiastic children from 2 year groups made this a very enjoyable first morning on the pBuzz Trail. Each session was finished with my friend and long-standing secretary of Lydbrook Band, Robert Morgan, introducing the new young players to the fun they can have playing and learning in a real brass band. Robert must have done something right as within a few days he had been contacted by a young player wanting to start playing trombone with the band - result! With a new band member and lots of smiles, Day 1 was a success.

For those of you who don’t know, a pBuzz is a beginner’s instrument. It’s made of plastic, so is light and very young-user-friendly. It has six notes and the sound is made in exactly the same way as we do on the other instruments in the brass family, so provides a perfect introduction to the basics of brass playing. In our pBuzz workshops, young players learn to produce a sound, then use that sound to play along to backing tracks of pretty funky tunes. We get through C Jam Blues, Let’s Get Together and I Feel Good in most sessions, with some improvisation thrown in for good measure, all after a happily confusing and energetic warm-up.

The instruments and mouthpieces were cleaned down and quarantined for ten days before the LRT (little red tardis) was loaded up again and off we went on a shorter journey to Chalford Hill. Four groups in this school – and a stage for me (other schools please take note!). Unfortunately, I only have enough instruments for three class groups of average size, so the fourth group had a more unusual session using just mouthpieces (and Covid compliant paper bags!). We worked on buzzing and rhythm work, had some great questions, as well as the standard physical warm-ups and a bit of singing to boot. Day two done. Results so far – one new player and two classes signed up to Whole Class for next term (and 188 children introduced to the brass playing life!). 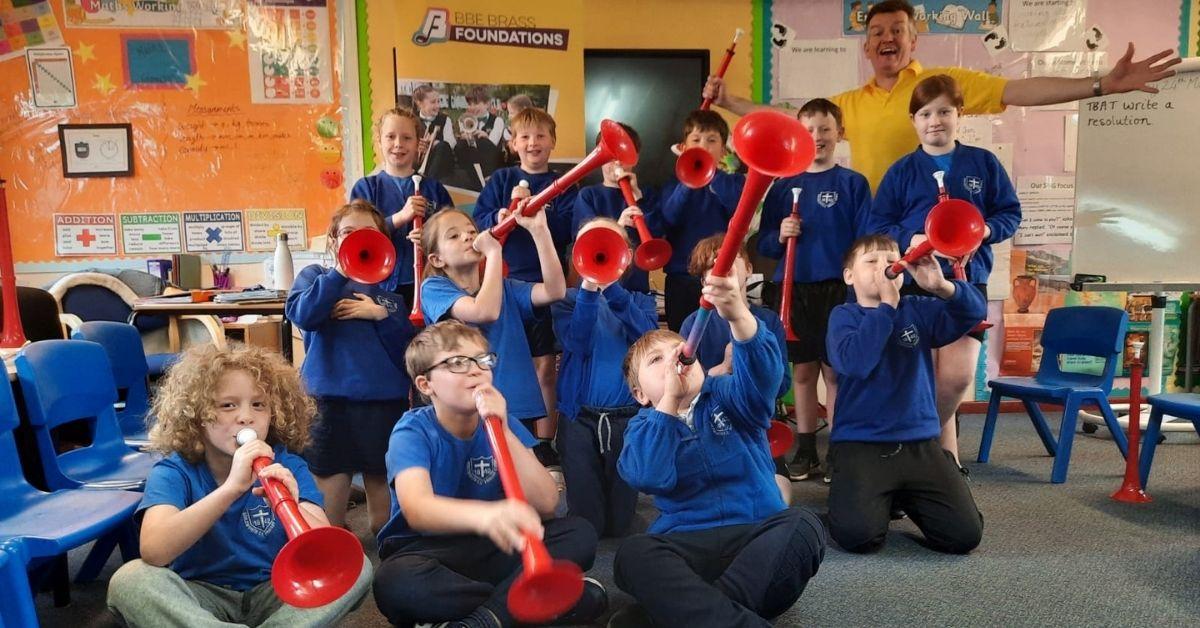 The A46 was calling, and Cheltenham was the next destination. Up the hill towards the famous racecourse and Prestbury St Mary’s. The real joy of the pBuzz adventures is the huge variety of schools I’m visiting. Everything from tiny little country schools in ancient and modern buildings, to big city schools with two and three class intakes. All offer the same basic thing – young people being introduced to playing brass instruments for the first time. The details unique to each are where the fun lies. Prestbury is a good sized school with two boisterous groups of around 60 pupils in each. I almost got a cup of tea on arrival but the teacher was so excited by the prospect of the workshop (being a former brass player himself) he made it…then drank it! Not to worry. Tea was forthcoming in between the sessions and we had a good day. Once again, one of the groups had a session using mouthpieces only, but it’s great how much rhythmic work we can get done just using these, not to mention, of course, that creating a sound on the mouthpiece is a key skill in playing the whole instrument! I was joined here by Cheltenham Silver’s chairman, who again invited the children to come along to the training band and see for themselves what this brass band lark is all about.

And so to the more compact and bijou end of the spectrum. Back towards the Royal Forest of Dean (to give it it’s fully pretentious title) and Churcham, then their sister school in Ashleworth – which are apparently not as close to each other as I had originally planned!

A rather sweaty Mr M arrived in the tiniest school I’ve been in so far and took on the might of 17 year 3s. They were ready to go, engaged, loud and great fun! And their classroom was very kindly colour co-ordinated with the BBE logos to boot...

Starting children on their musical journey has always been a real privilege. The wins are many and varied, whether it’s the one child who is asking loads of questions and signs up to the band, or the quieter one who looks so thrilled when they get a note out of the instrument after ten minutes; the shy child who doesn’t seem to be involved but comes up at the end and says “thanks Mr M, that was great” or the pest who says the same! Music and brass playing isn’t for everyone, and I completely get that, but what I am absolutely sure of is that must be available to everyone. All children deserve to have the opportunity to make that decision for themselves from a position of knowledge – I’ve had a go and that was great. Do I want more? Yes, no, maybe – all are valid replies to that question. It’s also possible that the reply “yes, I want more” may come in a year or two – or ten – and that’s still great.

Borders were crossed soon after half term as I ventured up the M5 into Worcestershire. Crowle was unfeasibly picturesque. We played outside as it was a gloriously sunny day and “it’s in the shade”. Yes, the kids were in the shade…not the pasty Scots teacher! Lots of fun with years 1 and 2 in the first group – some rhythm games, a song, a march around the playground and a round of Grandmother’s Footsteps sent them all back into the school happy. St George’s in Worcester and St Joseph’s in Malvern were next on the Worcs agenda and there’s more to come in that part of the country. I’m particularly looking forward to visiting Pebworth school in Stratford on Avon as they have a fledgling band in the school, as well as a staff band with a couple of neighbouring schools. It’s great that the staff have come together to play too, offering support to the young players. I’ll report back on that one!

Gloucestershire schools, from the smallest to the largest (180 years 3, 4 and 6 over three sessions in Robinswood school in Gloucester, supported by Glos Exelsior Band) have really engaged with these workshops and, as a Glos Music staff member as well as one of the BBE Brass Foundations Team, I’m confident that we will see a new generation of brass players develop in our schools and bands. This makes me happy. It seems that it makes some children happy to if these quotes are anything to go by:

"I couldn't really play it at the beginning because no noise was coming out. But by the end I could!"

"My cheeks were exhausted!"

"It was vibrating through me when I played it- it was a funny feeling."

"It was cool when you played 'Star Wars' at the end."

"It was all in your name, Mr. Magnificent!"

"Thank you for such a fantastic session. It was go-go-go from the start, which suited the class perfectly... So thank you again. And, as we said at the time, you would be welcomed with open arms if you wanted to visit us again. In fact, the following week, the class were most disappointed when they realised that a workshop with you wasn't on the timetable!" 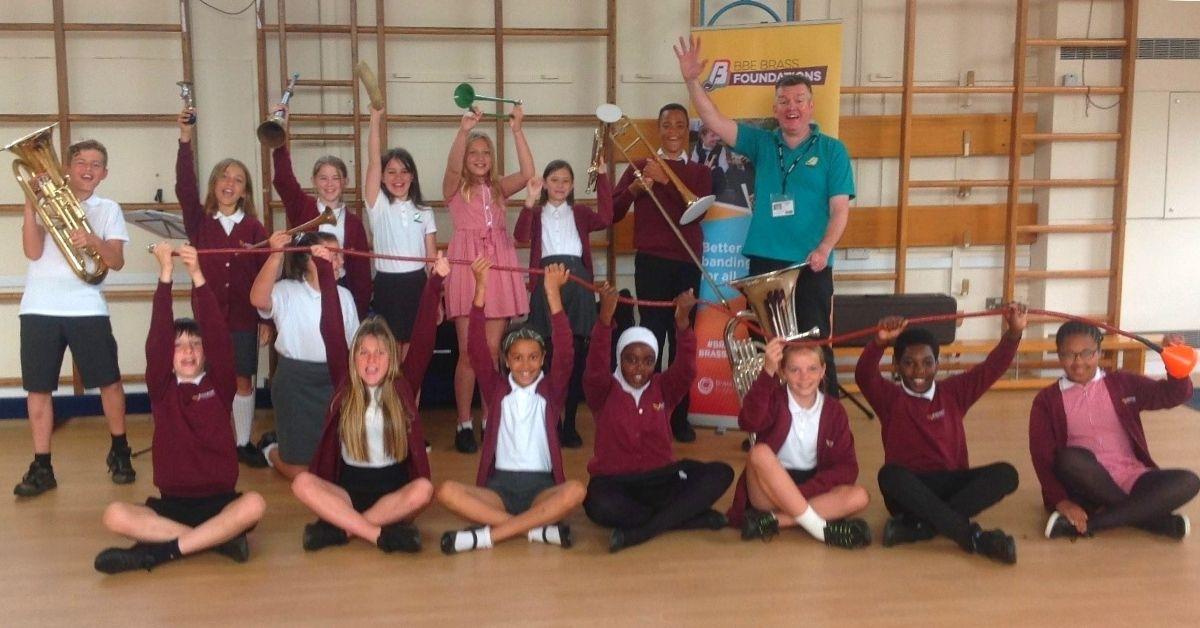 From Lechlade in the East to Strouport in the north; St Briavel’s in the west and Avening in the south, this term of the Little Red Tardis’ Musical Travels has been hard work but great fun and if it has encouraged one child to take the first step to playing music for the rest of their life, then it has all been worth it.