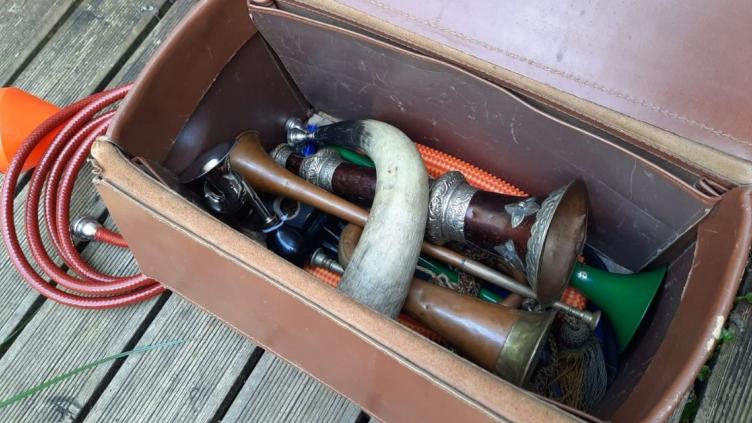 BBE's Brass Foundations programme started life in January 2021. Six month's on, our five Youth Development Brass Specialists are busier than ever. Here, Paul McLaughlin gives us another update (read his first one here), and introduces us to some of the team's latest musical inventions...

Some things in life are better done alone and others are definitely better done with friends! Having ventured back up the M5 to Worcester and found that I rather liked it, I was delighted to be asked by my colleague, Sheila Allen, to accompany her to Bromsgrove. Now that’s even further up the M5 than I had dared to go before, but why not?

The plan was for a demo session, followed by a pBuzz session, so the Little Red Tardis was loaded up with a motley collection consisting of two boxes of pBuzz’s, tuba, euphonium, trombone, Brass Foundations banner, and the ever growing box of tricks – including the now infamous gardenhoseaphone.

Sheila and I met at the interestingly named Lickey End School and I couldn’t help hoping that that wasn’t our fate! “Ah they were a nice team but they came to a bit of a Lickey End…”

Our first class arrived in a very excited fashion and were soon oohing and ahhing at Sheila’s very shiny and beautifully played collection of “organised tubing”. Sheila had taken them from simple hosepipes with funnels and mouthpieces (not as carefully crafted as the gardenhoseaphone, imho) to three fab post horns – including one with a bend in it which I’d never seen before – before delighting them with the beautiful sound of her flugelhorn.

All this was to no avail, however, as I definitely had the class vote for the tuba being the best instrument in the band (Sheila may request a stewards’ enquiry on that……). The box of tricks was opened and its mysterious contents released like some sort of musical Pandora’s Box. High up on the “what’s that?” scale was the rather beautiful Tibetan Prayer Horn; while the “gales of laughter” scale was topped equally by the clown horn that goes honk-honk and the aforementioned gardenhoseaphone on which a nice wee bit of improv, including a very Shirley Bassey-esque swinging of the hose, brought big smiles and lots of laughs.

Top end and bottom end of the band (plus strange friends) duly demonstrated, the children went off full of fun and chatter. We worked with children from Year's 2, 3 and 4. Year 2 especially enjoyed the workshop, which meant we extended the session to 40 minutes - when we'd only expected it to last up to 15. Seeing real life musicians and hearing them playing real live music is a wonder that will never stop enthusing children of all ages. Recorded music is great, and I would never be without it, but for encouraging the next generation of players you can’t beat the visceral sensation of someone taking air and turning into art. A breath, a blow and music is born – magic!