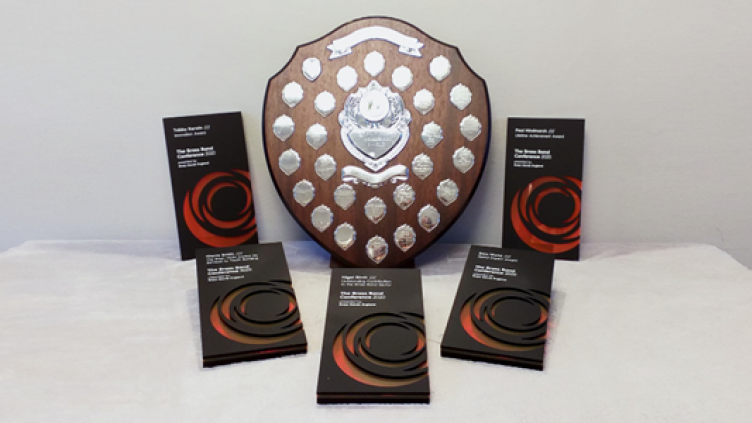 The Brass Band Conference Awards recognise those individuals and organisations in the banding world who have made an exceptional contribution to brass banding. Be it through inspiring young people, tireless dedication, leading creative and imaginative projects and collaborations, or bringing about positive social change, there is plenty to be recognised and celebrated.

The winners of the 2020 Brass Band Conference Awards were announced by Brass Bands England Chair, Mike Kilroy, at the Brass Band Conference, hosted by BBE on Saturday 19 September. The response to the request for nominations was excellent, both in terms of responses received and the high calibre of people nominated, making the judging a difficult task for the panel of BBE trustees. Four awards were made as well as an additional Special Award.

Glenis has been an exceptional member of the north east banding community, being the catalyst for the musical achievements of many young people, particularly those in an area of economic and social deprivation, who would otherwise not have the chance to enjoy learning music or the opportunities playing an instrument can bring. At Hetton Lyons Primary School it’s estimated she taught over 1,000 children to play brass instruments. She has been involved with Houghton Area Youth Band for over 40 years, as a player and now as a conductor and tutor. An extremely modest person, Glenis never seeks the limelight for herself, revelling in the pride and confidence she develops in her young people.

When it comes to innovation, mental health is one area that has been largely untouched through generations of banding. Tabby Kerwin of ‘Mode For...’ and her Brass on The Mind project are currently leading the way, encouraging all members of bands (not just players) to become Mental Health First Aiders. Tabby has provided courses and also presents a free podcast, on which she invites guests to join her and talk about their experiences of mental health to reduce the stigma within banding and playing.

Sam Wyne has been solo euphonium of Wantage Band since 2013 and is part of the musical leadership team there. He also teaches at Berkshire Music Hub, where his focus is on the wider engagement and accessibility for young people. Sam recently fronted the Mini Maestros project, which raised £19,000 to provide free music classes for children aged 0–3 years, led by professional musicians across Berkshire, with the aim of nurturing quality music-making and a love of music for life in local communities. In building foundations for the future of Wantage Band and, no doubt, many other bands across the country, his influence is sure to be seen for many years into the future.

Paul Hindmarsh has made an enormous contribution to brass banding over his lifetime in music. As a professional singer, academic and Producer on BBC Radio 3, he was instrumental in the foundation of the BBC Festival of Brass, later becoming the RNCM Brass Band Festival, which he continues to present. Founder of the Brass Band Heritage Trust, he has also been responsible for a vast number of commissions for brass band, encompassing all of the major band contests across the world. He was previously Associate Editor of British Bandsman and for the past five years he has been the Chairman of the European Brass Band Association’s Music Commission.

Nigel Birch has been the Musical Director of the Lions Youth Band organisation for over 30 years, taking it from a small group to a flourishing organisation with several bands and over 100 members, many of whom have gone on to perform with top bands in the UK. Nigel has led the band to two National Championship victories and performances at the European Championships and Youth Brass in Concert. His main focus is on ensuring that the band has a supportive atmosphere where players are encouraged to enjoy their playing via engaging rehearsals and tutoring in workshops from many of the area’s leading players. Nigel also works for the Love Music Trust, where he teaches the next generation of young brass players in primary schools, and has more recently become a trustee of the UniBrass Foundation, with responsibility for helping support young people as they transition from youth bands to university bands.

Mike Kilroy commented: “It was a great pleasure to be able to announce these awards for such deserving members of the brass band community. Every one of them has made a fantastic contribution in their own special way and BBE is honoured to be part of the process of recognising their achievements. There were many other outstanding nominations and we would like to encourage everyone to get involved in next year’s awards when the nominations open again in a few months’ time.”

As the conference was held online due to Covid-19 restrictions, the awards will be presented individually to the winners at suitable future events when they can be present.